Today’s blog will be a casual literature review of Russian Children’s Literature and Culture, edited by Marina Balina and Larissa Rudova and the paperback The Storytelling Animal, written by Jonathan Gottschall. Both of these texts were ones which I had chosen to deepen my understanding of narrative messaging, how storytelling can be used to disseminate information and the effectiveness of such a form.

The first text Russian Children’s Literature and Culture is a 390-page book containing 16 monographs on specific aspects of children’s entertainment in the Soviet Union. As I had a limited loan on this book I chose to focus on only two of these monographs which studied film and animation.

The 1st monography was: Arresting Development: A brief History of Soviet Cinema for Children and Adults by Alexander Prokhorov. As the title suggests, this text was a historical account of the development of Russian cinema over the 20th Century, and how it was adopted by the government to communicate propagandist messaging to children and adults. In the beginning Russia cinema was more commercially focused, however as time went on the Bolshevik (Russian Social Democrats) Party came to see its potential as an educational tool to disseminate their communist ideologies. The text is very informative in these areas, going into detail, analysing how films succeeded or failed in achieving this. Stalinist era children’s films would often exploit the impressionable nature of their target audience, using appealing characters, environments and genres as a hook whilst bombarding them with ideological messaging at the same time. Protagonists as walking models of the communist ideal were wholly loyal to their county and tended to demonstrate self-sacrificial behaviour, martyrs. The author quotes Evgenii Donrenko, who writes how these films fostered an ‘infantile deindividualized audience, obedient to the government as the audience’s ultimate parent. Infantilism guarantees the underdevelopment of individual personality and agency.’ Essentially brainwashing viewers into accepting these ideologies.

The second monography I read, Comforting Creatures in Children’s Cartoons by Birgit Beumers, gave a deeper analysis into the animated films of this time which were treated very differently to their live action counterparts.  Unlike live action, animation was not fully adopted by the government and was often sidelined to communicate economic and political news. Without being bound to the same level of scrutiny, it had less constraints and could therefor get away with its subversive critiques of society. The boom of Disney in America saw a rise of animation in Russia with the government beginning to appreciate the impact which it had on Children. Fairy tales were commonly chosen as the narrative medium of choice, the author writes: ‘the fairy tale suited propaganda purposes for two reasons: on the one hand by drawing on national heritage, on the other hand because of the inherent element of moral instruction as considered appropriate over centuries and could therefore hardly contradict socialist principals.’ However, fairy tales worked to both serve and dismiss propagandist messaging, focusing on morality rather than ideology.
Visually, Russian animation was far less cartoony than its American counterpart, many animators coming from graphic design backgrounds. Some films had a very realistic aesthetic with character animation based off live action reference, others, like the work of Yuri Norstein, had a much more handcrafted feel, using painted textures and/or puppet animation.

Overall, I found this text to be very informative, it was especially interesting to know some of the workings behind propagandist film making and how certain film making decisions can work for and against their messaging. In terms of my research project and its focus on narrative as a communications tool, this text provided me with some insight into how fairy tales, which are associated with tradition and morality could function as familiar (safe) vessels for with to safely conceal ideologies and messages.

The second text, The Storytelling Animal illustrates the breadth of storytelling and how it permeates our lives and culture, covering television, dreams, advertising, science media etc. The text also studies how stories effect our brains, how narrative sufficiently simulates real world events enough that it tricks us into believing them as real (which is why as spectators we become so emotionally invested in the stories we are reading). The author speculates why this may be the case and why we are drawn to storytelling in general, ‘fiction allows our brains to practice reacting to the kinds of challenges that are, and always were, most crucial to our success as a species.’ He also brings up some interesting research such as fiction being more persuasive in disseminating information than non-fiction, which has to do with us dropping our guards when we are immersed in story.

Like Russian Children’s Literature and Culture, The Storytelling Animal observes the function of narratives in helping us, as humans, understand the world. The former mentioned text observes the different forms of storytelling for children in Russia with great emphasis on its role in propaganda, governments employing narrative devices to engage viewers whilst feeding them subversive, ideological messages. The Storytelling Animal could be seen as a sort of prequel to this book, while Russian Children’s Literature and Culture is very specific, The Storytelling Animal is quite general and highlights the breadth of storytelling in our culture. Despite the fact that this text could have been longer or more focused it does a pretty good job capturing how and why we are attracted to stories and how, like humans, stories have adapted over time. 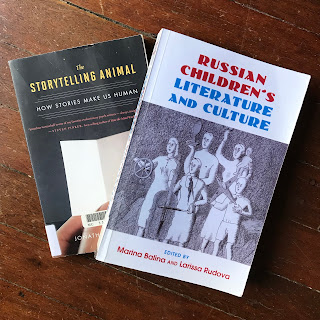 Here are the second set of images for late February. 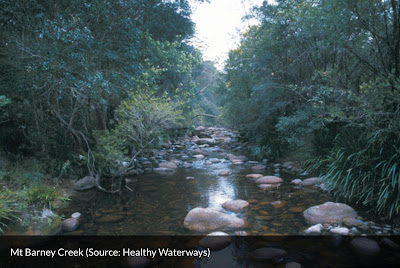 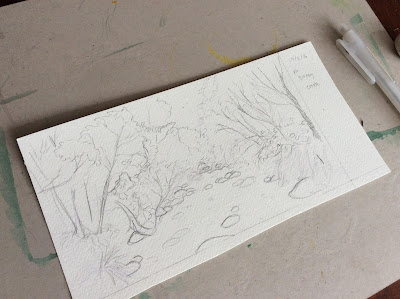 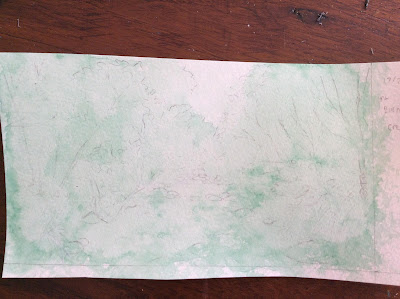 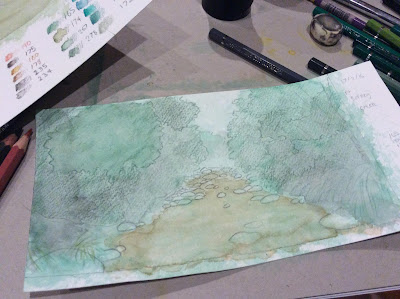 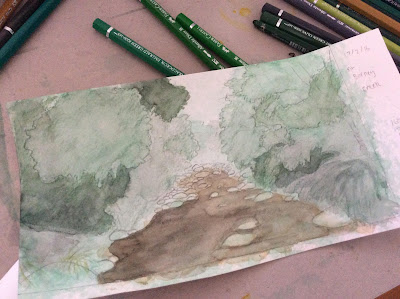 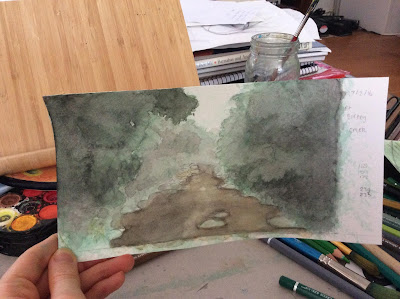 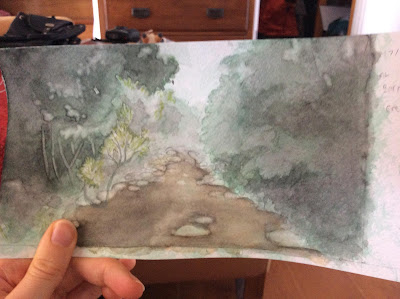 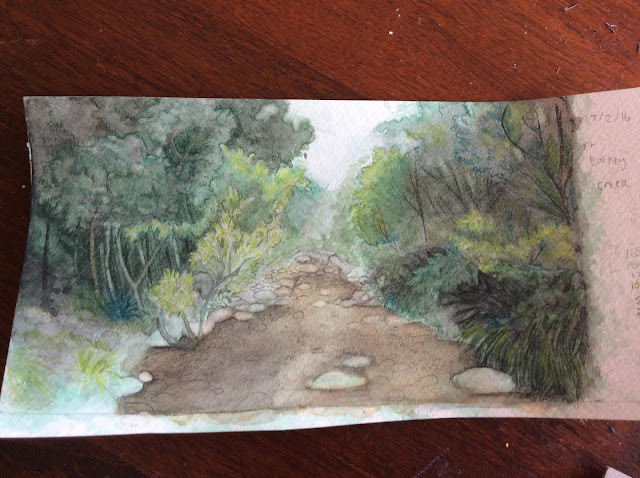 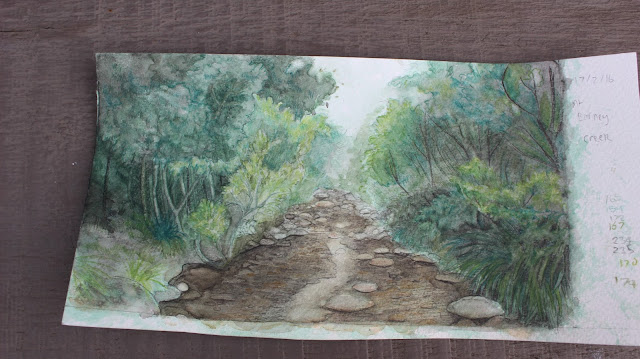 Not all water colour images work out as well as you might hope, my most recent illustrations both being quite troublesome.
In these studies I tried to prioritise contrast in the hope that it would add depth and and framing to the images. While a sense of framing was achieved I need to make sure that accuracy to the photography does not come at the expense of depth, as shadows in photographs can be misleading when deciphering form. 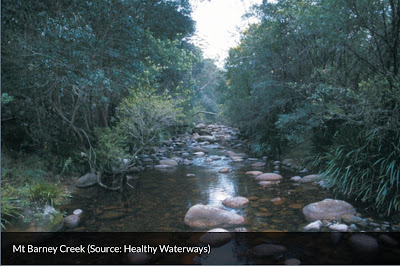 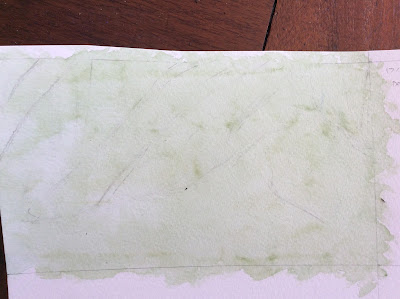 1. Light pencil and base watercolours 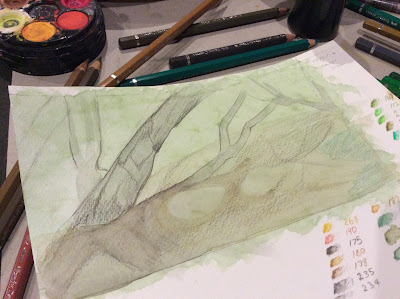 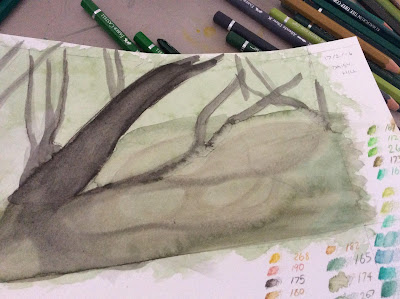 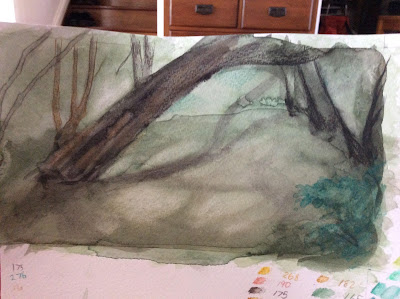 4. Pencil on top of watercolours 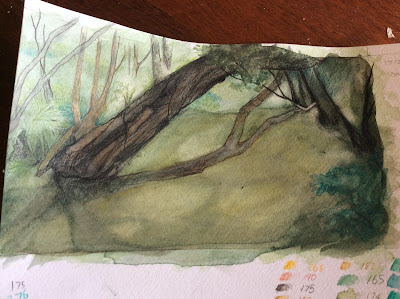 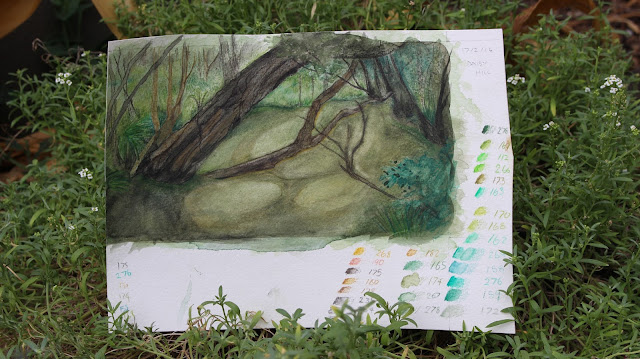 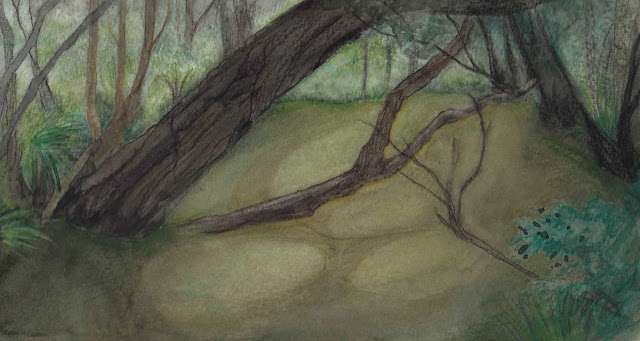 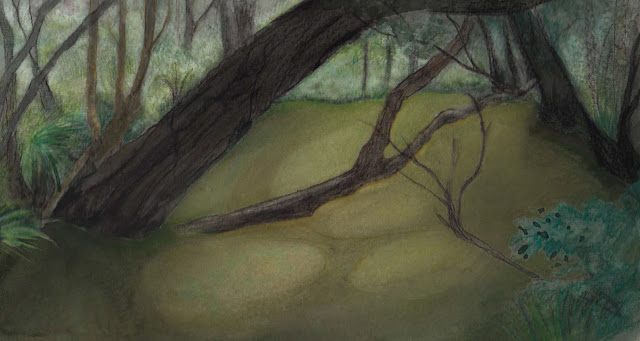 Another issue I seemed to face with these images was the smothering of the pencil under the heavier watercolour paint. This ended up wasting a lot of time but should be a helpful lesson for future works!
Depiction of water is also in need of further practice!
Digital editing too!

This is getting a bit long so I will post my second study in the next post.

For my third image I decided to choose one off the 'Healthy Water Ways' website, as they are the people I am working with on this next project. One of the interesting things about this image is its vibrant quality, quite different from the more de-saturated studies I had tried earlier.
Working on this image I also decided to use water colour paint as well as aquarelle pencils.

Like the second study, I had a bit of a hard time with the indistinguishable background foliage. I tried to create some definition between the trees and began diverting away from the reference photo to avoid further confusion. To make to image work as a composition I also worked on framing the river by adding greater contrast to the outer trees and by using very light washes for the tree trunks in the center.

One of the biggest issues I have with this image is the river, which looks like more like a solid surface rather than a transparent one. As well as foliage I will have to also work more on my depiction of water especially as it is key to this project 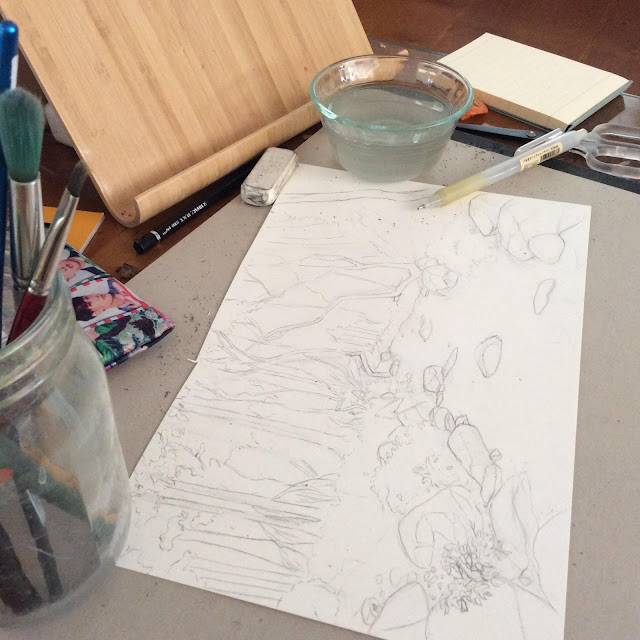 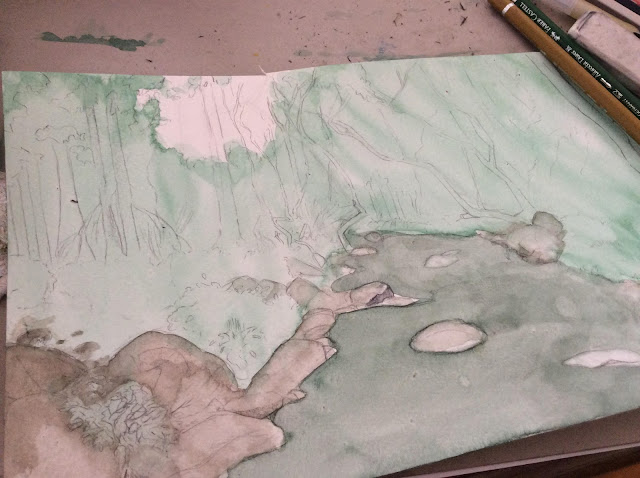 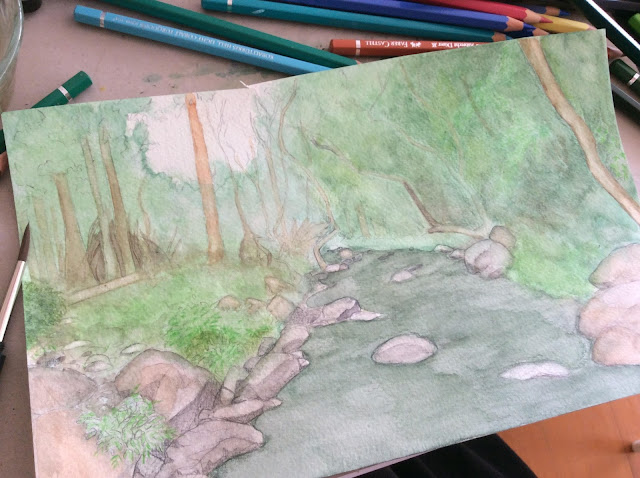 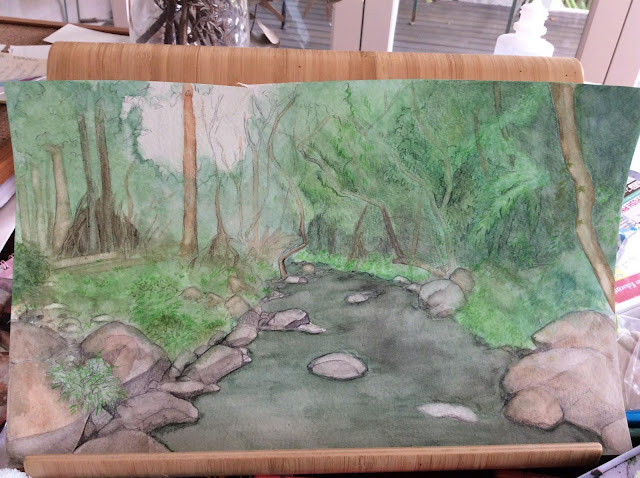 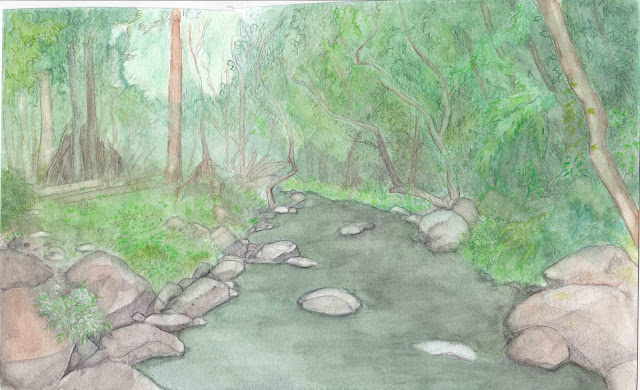 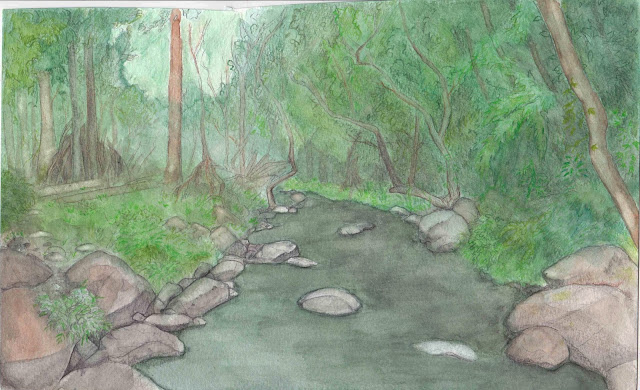 Final images uses contrast and brightening filters on Photoshop.
Posted by Unknown at 20:12 No comments:

For my second watercolour test I decided to document the process more thoroughly. This image was done in a very similar way to the first, with a light wash and a build up of colour all done with Aquarelle, watercolour pencils. I had a rather hard time with this image, especially in rendering the background foliage as I didn't know what I was meant to be drawing. The framing I used was also rather square and ended up squashing the composition. To top it all off I seemed to struggle greatly with the grass, the strokes being too wide and unconvincing. 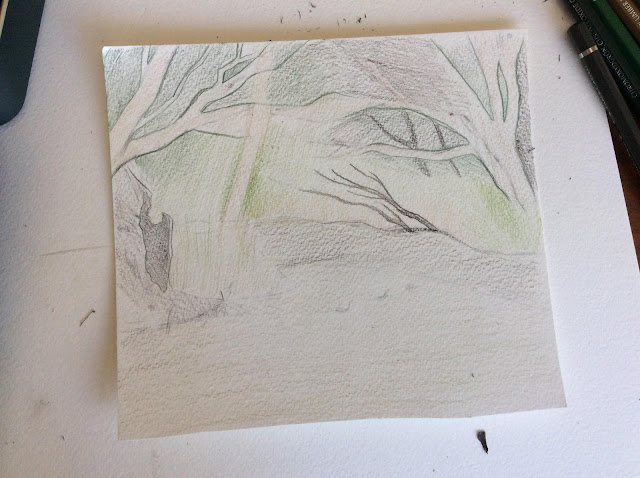 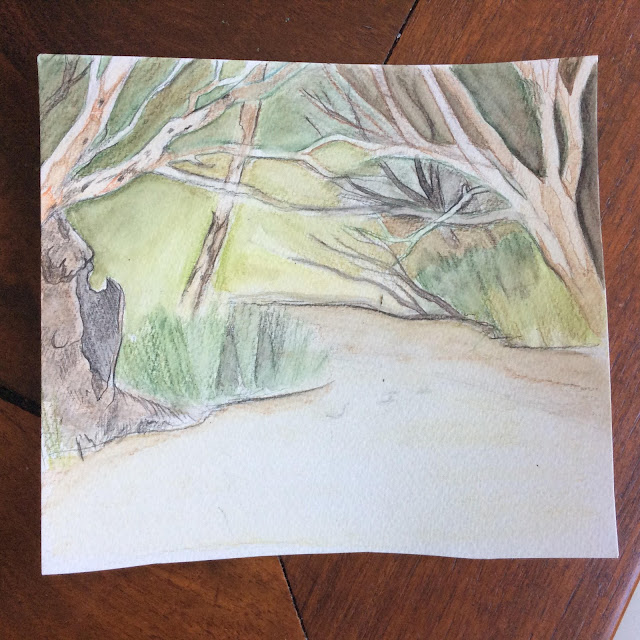 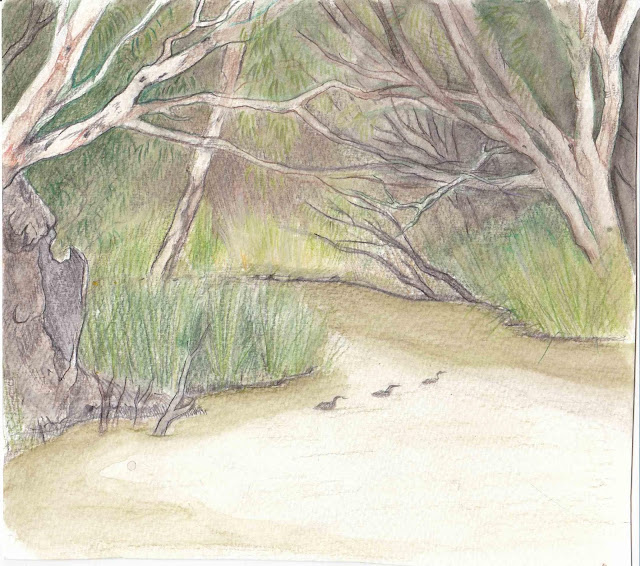 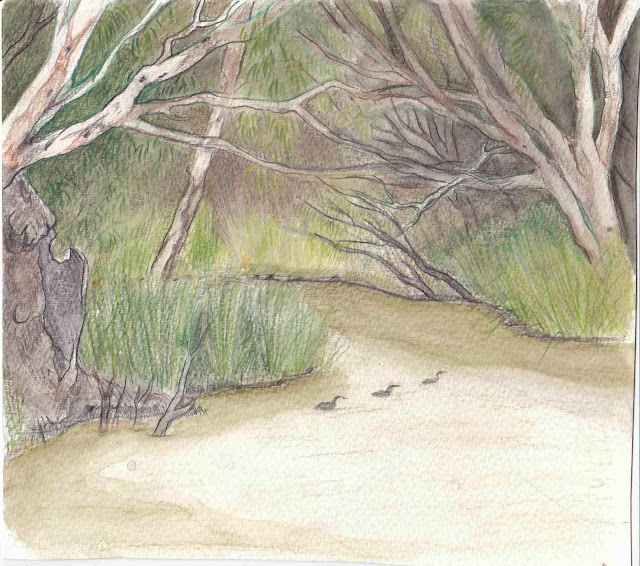 For this final image I added a bit of contrast on Photoshop. I would like to experiment with this a bit more later on!

This February I have been working on some watercolour studies for my upcoming project on water health in South East Queensland Rivers.
In my last project I made an animated film set in Fiji which included close to 30 watercolour backgrounds. These watercolour images provided me with a great opportunity to improve my technique and experiment with new ideas. However, due to my constant improvement and experimentation I did notice that many of these backgrounds were quite inconsistent. As such I am focusing on documenting my process for this second project in the hope that I can work out some kind of formula to keep these backgrounds in check.
My thoughts on backgrounds in animation


Backgrounds can play many roles in animation but most notably their function is world building and creating an environment which feels immersive and believable. As such, it is important that there is nothing in the backgrounds which could potentially compromise this. Inconsistencies are very dangerous and when something unintentionally stands out it removes you from the illusion and you are no longer partaking in the stakes of that world.

Water Colour Study 1
For my first study I used an image of the Lockyer Valley, home to the Lockyer Creek which is one of the water basins that feeds into the Brisbane river. I thought it would be interesting to see how much clearer the water was further away from the city and whether or not there was a greater density of surrounding vegetation. In the photo reference I used, it looks like one of the sides of the embankment has collapsed in the past. This would be good to look into later on as I try to depict erosion in my film.
Technique wise; I started with a mechanical pencil sketch and began colouring the image with aquarelle pencils. A light wash was done, brushing the paper which had been shaded with a sandy coloured pencil. Progressively more colours were added each time to build up the depth and definition of the scene. Because pencils were the only medium used in this image it has a very light and overexposed appearance, not unlike the photo reference used. 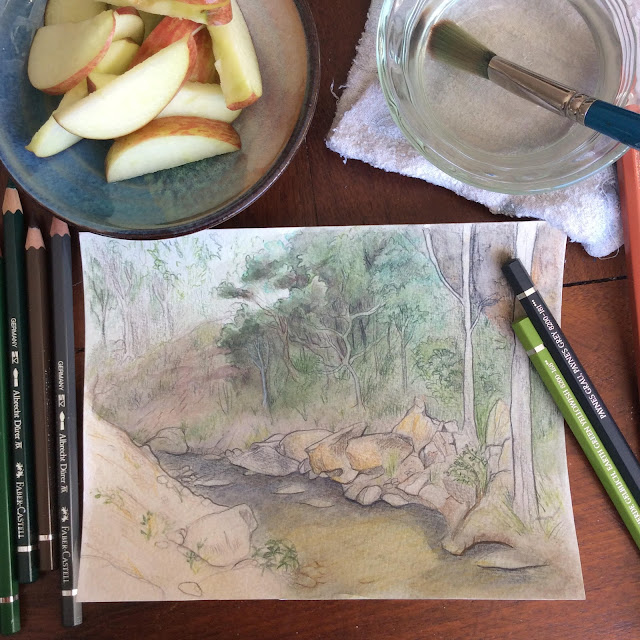